exhibited and produced by

“Retrato Proteico is an art project in which the artist Marta de Menezes portrays herself using different media. Her artistic self-portrait employs technological media and knowledge from biological science in the creative process. It is an investigation and research process which, like other projects by Marta de Menezes, combines artistic
creation, the conventions of art history and technical processes, and the languages and graphic conventions of science and technology.” Inês Moreira

launched at ZDB_Lisbon on 4th April 2009

_A conversation with Marta de Menezes

by Inês Moreira [portuguese and english] 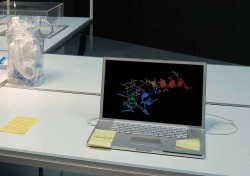